Après Entertainment in Utah: The Fall of the Zion Curtain 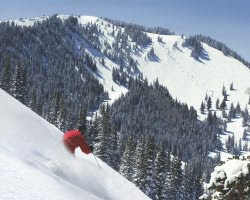 When people think about visiting Utah for the first time, often they will have a little apprehension about the local drinking laws. Rumors and reality get intertwined when it comes to a subject that can even mystify locals at times. While the world famous Utah powder is what generally draws people to the area, the possibility of not being able to partake in an après beverage or two can be a bit off-putting.

Many have heard about the infamous “private clubs” of Utah, although few understand this alien concept. To gain entry into a private club is not exactly a feat of social status, but rather an inconvenience involving sponsorship or an entry fee. There is also the matter of the “Zion Curtain,” a barrier that prevents bartenders from passing drinks directly to patrons.

On July 1, a bill was passed changing these archaic laws. The need for sponsorship and paid entry into drinking establishments has been eliminated, as well as the Zion Curtain. While these changes make obtaining a drink in Utah comparable to mountain towns throughout the country, “The Greatest Snow on Earth” is still an element of Utah that cannot be found anywhere else.

Email ThisBlogThis!Share to TwitterShare to FacebookShare to Pinterest
Labels: Utah