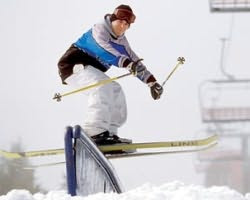 Most of our customer base is probably unaware of the hidden beauty that is Mont Sainte-Anne ski resort in the eastern portion of the province of Quebec. This is most likely due to the fact that the resort can be difficult to reach by car (six hours from Boston, eight hours from NYC), but guests who choose to fly will find that the resort is barely a half-hour drive from Jean Lesage International Airport in Quebec City.

Even a short trip to Mont Sainte-Anne will give skiers a very rewarding vacation, and its relative seclusion can be a great way to avoid the crowds that plague most of the American resorts during busy holiday periods. The premier lodging property at the resort is the Chateau Mont Sainte-Anne, a four-star property just a few hundred feet from the lifts. This property has everything one could want in a deluxe ski lodge, and the customer service is second to none. Furthermore, the hotel has undergone recent renovations that have updated about half of the existing rooms into a more modern and luxurious style. These ‘nordic rooms’ are a bit extra, but worth every penny. Another option for larger families and groups are the Chalets Mont Sainte-Anne, located right next door to the Chateau. This property offers units about 50 units, most ranging from three to five bedrooms, all within walking distance of the lifts.

Some of the best features of Mont Sainte-Anne are those attractions that have nothing to do with skiing. The Sainte-Anne-de-Beaupré Basilica is one of the most well-known cathedrals in all of Quebec. This imposing medieval-style church presents 240 stained-glass windows, an outstanding rose window as well as many enchanting works of art. The church is divided in five aisles separated by imposing pillars. Lastly, take a day off from the slopes to enjoy the splendor and beauty of the old city of Quebec. Last year marked the 400th anniversary of the city’s founding, and pieces of history can be found everywhere. The Quebec Winter Carnival is the city’s most famous annual celebration. The festival typically starts on the first Friday of January and runs for 17 days, and is reminiscent of Mardi Gras celebrations in other regions of the world. With close to one million participants, it has grown to become the largest winter celebration in the world.