Get Out and Snowboard New York!

bustling, metropolis teeming with life. They often forget that outside New York City there is a

huge state with a lot of landmass to explore and still tons of people to meet. And though New

delivers the ultimate winter experience. No worries, you can easily get out and snowboard New

York with the awesome package deal available on tourdesport.com. Shred the gnar, ride the

pow, and tear it up at the parks! 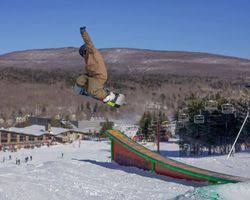 access for the out of state winter adventurer. And this resort doesn’t just have one mountain to

choose from, they have three! And on those three mountains there are about two hundred and

forty acres of boarding terrain, giving you smorgasbord of terrain choices whether you are a

beginner or an advanced rider. And for the park riders Hunter Mountain gives you a choice of

encouraging new riders. That means you can strive the Angelo that trick you’ve been working

on or you can work on bailing just right so that you don’t land on your multi-tool. Whichever kind

of rider you happen to be, Hunter Mountain has you covered. But maybe the rest of your crew

isn’t as into snowboarding or skiing as you are. That’s okay, because Hunter also has tubing,

horseback rides, and a spa to ease your aching muscles. Book now and snowboard New York’s

There is another rad mountain that tourdesport.com offers to those craving to snowboard

New York and that mountain is called Whiteface Mountain located in Lake Placid (and no, there

are no giant crocodiles). But Whiteface Mountain still has some extreme terrain available to ride

with their Slides. The Slides are a true double black diamond experience and are only open

when ski patrol deems them decent and are also only available for experts to ride. However, if

you’re going to ride this challenging landscape ski patrol may require you carry a shovel,

beacon, and probe or ride in groups. The thirty five acres available in the Slides is the ultimate

off-pisté ride. They don’t make snow for this area so it is 100% Mother Nature’s own perfect

mountain in the east and has the biggest vertical drop east of the Rockies. They have eighty-six

trails that cover over twenty-two miles of terrain on three mountains. But perhaps you want to

show off your skills in a park instead of blazing down the giant vertical drop. Whiteface

rides, and more. You may not be the expert to ride the Slides but that doesn’t matter because

Whiteface Mountain has what you want to snowboard New York.

Leave the big city behind and get into fresh, crisp mountain air and see what New York

has to offer you. Check out the packages on tourdesport.com and get out and snowboard New York! 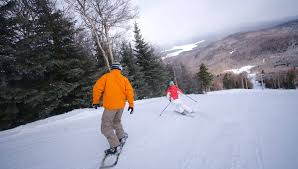