Killington in Vermont is a winter lover’s dream mountain. It gets substantial snow fall,

has tons a ridable acreage, plenty of parks to grind in, and giant vertical drop that’s sure to

satisfy even the most advanced riders. When you purchase some Killington lift tickets you get

access to not one, but, seven mountains, one of which is about five miles away from the resort.

tickets today and come see what people are falling in love with.

Vermont’s State Parks and Ski Areas, Perry Merrill, wanted to develop the peak to see it fulfill its

potential. He partnered with Preston Leete Smith and the two developed the resort which

opened in 1958. By the 1960’s the resort was operating well above industry standards and so

their customers. It was getting so busy that it became hard to keep track of customers and the

customers knew that and would share lift tickets. A Killington employee by the name of Charlie

Hanley came up with the solution. The ticket wicket, that little tag that now attaches to your ski

jackets without damaging them. Before that invention the passes would be stapled or glued onto

customers clothing. With the invention of the wicket it became easy to identify all the Killington

lift tickets and make sure that no one was sharing them anymore. 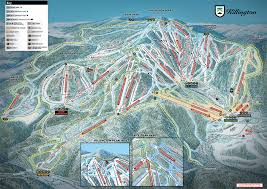 As was stated in the beginning of this article, when you purchase Killington lift tickets

you get access to seven mountains. The main Killington resort area lays claim to six of those

mountains and the Pico Mountain Resort has the final peak. There are not currently any trails or

the most out of your experience. The Killington Resort is home to over one hundred and fifty

trails, and there are easier trails available off every lift so even a novice can see the majesty of

all the mountains. If you’re really looking for a challenge Killington is home to a double black

diamond mogul trail known as the “Outer Limits”. If you prefer to go long and relaxed you can try

the longest trail in the Eastern U.S. which is just over six miles long and known as the

“Juggernaut”. Killington is home to one of the largest half pipes in the Eastern U.S. as well and

has at least three to five major trails that have jumps and ramps on them. There are normally a

total of about six parks accessible, including Burton’s The Stash, which is a natural inspired park

that has more than fifty features and a half pipe.

Killington has got you and your ride covered. Purchase your Killington lift tickets from

tourdesport.com today and experience the splendor that is the Killington Resort today!

Email ThisBlogThis!Share to TwitterShare to FacebookShare to Pinterest
Labels: Killington